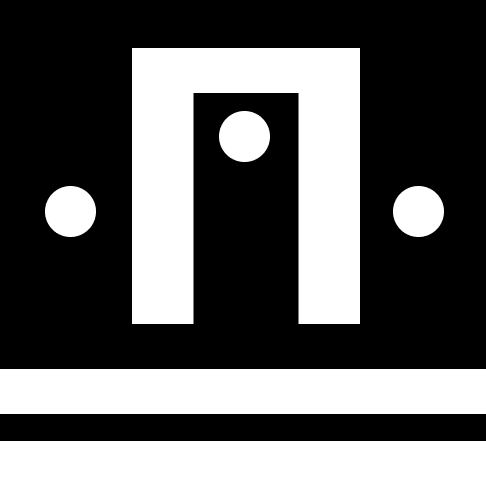 I went to VES.

This tile shows the bell tower famous to VES, which rumor says if walked under, you won't graduate. I am represented by the circle under the belltower, and two of my friends as the circles outside it. The two white lines below represent the first two years of high school that I spent there.

There’s a little bell tower on the campus at VES; it’s on a path from one building to another, but students make a point to walk around it. Legend says, if you walk under it, you won’t graduate from the school. For every person who got kicked out or transferred out, there was a story of them ignoring the rumor. I never walked under the bell tower, and I didn’t graduate from VES either.

VES is a great high school and I look back on my time there fondly, but I regret the way I acted through that time. I didn’t take advantage of all it had to offer, especially in terms of the community it fostered. Everyone was so genuinely themselves, so comfortable in their own skin it seemed. There were no popular kids or unpopular ones, just different groups that were very loosely divided. I was accepted into the world at school, but I never felt like I fit in. I didn’t dress the same as everyone, I didn’t have the same interests, and I just didn’t feel comfortable with myself enough to branch out. I had my group of friends and I stuck with them gladly. Whenever there were school events, which there were many since it was a boarding school (I was a day student), I didn’t want to go. If I did end up going I felt uncomfortable; if I didn’t, I would be upset with myself for not being brave enough to step out of my comfort zone. That was the hardest part, wanting to do things and be a certain way, but not being able to because of all the self doubt that followed me along through every action, word, and movement at that age.

I liked a lot of the people and wish I had gotten to know them better, or let them know me, but I was too concerned about protecting myself to do it. It’s sad, because when I see people’s social media now, I see that we could have been friends. But I don’t view it as a total travesty either because I look back on the school in a great light. I had my friends, especially Caroline, Bri, and Hannah, who made the experience what it was, and we had a lovely time.