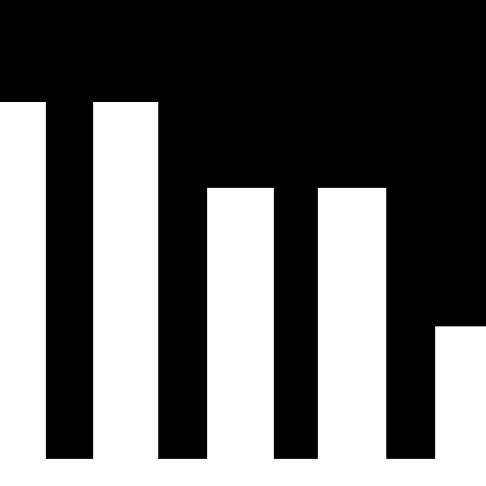 I am the youngest in my family.

Each bar in this tile represents a person in my family. The two tallest bars are symbolic of my parents; the two middle sized bars are my brothers, and I am the shortest one.

My brothers are eight and nine years older than me. Their friendship is unlike any two brothers I’ve ever seen. They never fight, they often have the same friends, and they’ve gone through life together; from being at the same schools to now having their first sons within a month from each other. I love their relationship and would change it for anything, but there are times when I feel alone. Both are married, and to the most wonderful and inclusive women, but at family gatherings, when everyone at the table has a spouse, it’s stark. It feels lonely, as if I don’t have the confidants they do. My brothers have each other and their wives. My parents have each other, while I’m in a different stage in life with no one there to share it with. I can always count on my family and each and every one of them would be there for me if I needed them, but it’s not like they’re living my life with me. They’re not going through the same things, and it’s hard for them to really understand when there are so many degrees of separation between our experiences.

I’m not proud of this story, but when it was announced that both my brothers were having their first kids just weeks from one another, I was unbelievably happy for them, but I also felt my loneliness creep back up. This was another thing that they would experience together, be there to support each other through. They would be going through this life changing event...together. When my time comes I’ll have their experiences to draw on, but it will have been done. The things I’m learning as I go will seem obvious to them. When everyone was rooting for two boys, something in me quickened that selfish reaction. Everyone was talking about how it could parallel their own lives of being best friends. They talked about carpooling, having the other’s kid over at one house one day and the other the next. I felt called out as not having as good of a relationship, or one worth pursuing with my brothers. They didn’t want their kids to have the relationship they did with me, rather than they had with each other. It’s an odd, selfish, mentally ill person’s way to think of it, but it was overwhelming. My mom noticed me off the following day; it was something I didn’t want to admit since really I was unbelievably happy for them and so excited to have two incoming nephews, but when I did she finished my sentence. She understood and saw that. I feel like I’ve had to go through a lot of life alone, not without support, but processing things and learning them alone. It’s pushed me into my head, and made me independent. But it’s also made me put pressure on myself to figure things out without asking for help.

I love my family so, so much, so this was a human moment that came out and that I’ve worked through. The relationships I do have with my brothers is special, and the one I have with my parents is too. I wouldn’t change my family for anything, and through these moments where I feel like I’m leftover, I just have to bring myself back to reality and to a place where I can see clearly.